I grew up in a pretty athletic family, which meant we spent a substantial portion of our weekend shopping excursions perusing the aisles of stores like Gart, Foot Locker, Academy Sports, and Dick’s.

My brother, unlike me, was blessed with the gift of hand-eye coordination. His sports gear needs, therefore, were diverse and constantly changing. In the fall, he needed football pads, cleats, practice jerseys and mouth guards. In the winter, it was basketball shorts and high tops. Spring was the season for baseball bats, mitts, and another pair of cleats—because hello, you can’t play baseball in football cleats. Just ask the shoe salesman at Sports Authority.

I was never very good at sports that required hitting, shooting, throwing or catching, which eliminated pretty much everything except cross country. So for the most part, the only equipment I requested was a simple pair of running shoes.

Fast forward ten years—I know, it’s a big jump, but stay with me. This is the crucial part of the story. A few months ago, I started noticing a disturbing trend. People were wearing—and running in—shoes shaped like feet.

I know what you’re thinking—duh, Brooke, of course shoes are shaped like feet. That’s the point.

But these kooky kicks took the idea of a snugly fit shoe to a whole new level. Imagine dipping your foot in liquid rubber, letting it harden, and then using the resulting product as footwear. Welcome to the “minimalist movement.”

Before I knew it, I was seeing these glorified water shoes (actual name: Vibram FiveFingers) everywhere—on running trails, at road races, on the track, and at the gym. There is no way you could fit a sock inside those suckers. Every time I saw someone exercising in them, I couldn’t shake the image of the hot, sweaty, stinky mess that was surely brewing underneath that thin layer of rubber.

I never once considered jumping on the minimalist bandwagon—that would only guarantee me yet another notch on the old injury belt. Besides, I’m already sweaty enough. My minimalist footwear would have to be light and breathable—like a sock, but with a protective sole.

That’s when it hit me: I was a running shoe minimalist way before people started squeezing their tootsies into rubber foot-gloves.

Okay, now let’s rewind a bit—back to the world of my brace-faced, fuzzy-headed 14 year-old self. I had just started practicing with “the high schoolers,” which was a pretty big deal for a lowly eighth-grader.

To help me prepare for track season, my parents took me shopping for new running apparel. I picked out ten pairs of Soffe shorts in assorted colors (all the rage circa 2002) and of course, new running shoes: a bright red pair of Nike Prestos.

For those of you who don’t remember Nike Prestos because you were either too young or too smart to run in them, let me bring you up to speed: this first-generation minimalist shoe was, for all intents and purposes, just a thick sock attached to an utterly worthless foam base.

But forget about function—when you’re a nerdy middle schooler trying to make an impression on the cool high school runners, it’s all about fashion (as you can tell by looking at this photo from my early competitive running career): 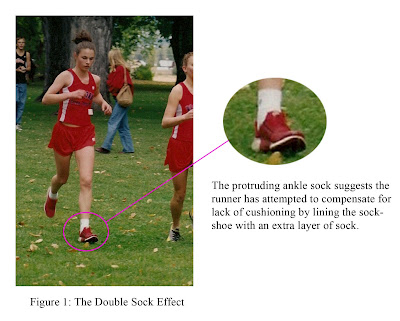 Prestos became my signature. Everywhere I went, people asked me about them. At track meets, I was known as “the girl with the sock-shoes.” It never occurred to me that this nickname might have been intended as a diss, which was probably the case.

I began to think of myself as a pioneer of cutting-edge running technology. I was convinced that a more conventional shoe model would be too heavy and bulky. My Prestos made my feet feel light and fast. When I started winning races, I became even more certain that my featherweight footwear was giving me a competitive edge.

And then I got hurt.

It was my first of many foot injuries, and my doctor was appalled to learn that I had been logging 100% of my training miles in a pair of fancy slippers disguised as running shoes.

“But they’re so light,” I argued, desperately trying to change his mind.

“I know. And do you know why they are so light?” he asked in a slightly condescending tone. He paused for effect. “Because THERE IS NOTHING THERE TO SUPPORT YOUR FEET! YOU MIGHT AS WELL WEAR SHOES MADE OUT OF RECYCLED PACKING PEANUTS!”

And just like that, my blossoming minimalist tendencies were nipped in the bud. When my injury had healed and it was time to purchase a new pair of running shoes, I opted for the Asics Gel Cumulus model.

By normal running shoe standards, they were relatively light. Still, compared to my old Prestos, they felt like cinderblocks with shoelaces. Gradually, though, I got used to them. Soon I refused to run in anything else.

If it hadn’t been for the exploding popularity of the minimalist FiveFingers, I might have lived my entire life without the slightest remembrance of my fleeting love affair with Nike Prestos.

As an older, wiser—some might even say sagely—runner, I cannot think of a single argument for running in a shoe that is basically a modified scuba fin. People will say things like, “Oh my gosh, they are sooooooo comfortable.”

Well, mukluks are comfortable too, but would you want to wear them on a hilly five-miler? That’s a rhetorical question.

Today’s mainstream running shoes are the product of decades of scientific research. They have been carefully designed to accommodate the subtleties of human biomechanics. And best of all, they are super soft and cushy.

If running is your preferred mode of exercise, running shoes are really the only piece of specialty equipment you need. In fact, I would argue that running itself could be considered a “minimalist movement”—with or without stinky foot-gloves.

Posted by Brooke Andrus at 9:24 AM