Over the past few weeks, I have made a concerted effort to spread my wings and step outside of my comfort zone—my “comfort zone” being Netflix and microwave cooking for one (although let’s be honest: that’s a good-ass Friday night right there). So, when the opportunity to participate in a big 10K race presented itself, I nudged—nay, forced—myself to accept.

Everything about the race itself was awesome: fast course, decent competition, ideal temperature, adequate number of water stops. It was the post-race process that puzzled me.

Because even though the finish-line chute basically dumped my fellow competitors and me directly into the post-race expo—where apparel booths, nutrition stations, and Jazzercise (yes, it’s still a thing) dancers could keep us occupied for hours—there was NO AWARDS CEREMONY. I repeat: NO AWARDS CEREMONY.

In my opinion, this represented a huge oversight on the part of the race organizers. Why? Well, I’m not exactly proud to admit it, but my years as a competitive high school and collegiate runner conditioned me to crave the 30 seconds of fame and affirmation that a medal ceremony provides. Somehow, the high that accompanies the ritual of having a medal placed around my neck is enough to magically offset the horrible agony I put myself through to earn said medal—thus validating my efforts and keeping me coming back for more. So, while Lady Gaga and I might not see eye to eye on a lot of things—one of them being acceptable uses for top sirloin—we’ve got one thing in common: we both live for the applause.

Without the promise of such a high, however, I had no motivation whatsoever to linger alongside the hordes of sweaty people milling around the expo. Plus, the lack of public recognition made the whole experience a bit anticlimactic. I busted my ass to finish fourth overall for women—and second in my age group, thank you very much—but all the stragglers out there still huffing and puffing away as I cooled down would never know that. So, after I caught my breath and drank my complimentary bottle of water, I jogged back to my car and left.

Fast forward to a few days ago when I went to collect my mail. Underneath mountains of grocery store flyers and a few promising Papa John’s coupons, there was a small padded envelope. The return address was a P.O. Box for the Phoenix 10K. My eyes widened as a brief rush of excitement flooded my body. I tore into the envelope with a zest I have not exhibited since receiving my last high school report card.

As I pulled my second-place medal from the mangled mess of bubble wrap, I smiled with great satisfaction. Holding that medal made me feel good. Really good. And then, as quickly as it had come, that good feeling disappeared. Because about 15 seconds after I extracted the medal from its packaging, I realized that it was completely and utterly useless.

Now look, medals might not be my award of choice, but I enjoy them as much as the next obsessively competitive narcissist. The problem is, there’s an unwritten rule in the running community that one can only wear one’s race medal on the day of the corresponding event. Thus, the value of any medal hinges on timely receipt.

With this epiphany, I suddenly felt very angry. Why—WHY—would they send me this NOW? Was this the race director’s idea of cruel joke?

WHAT THE FUCK AM I SUPPOSED TO DO WITH THIS?!?!? I lamented aloud, shaking my medal at the sky.

When I returned to my apartment, I carelessly tossed that stupid, worthless hunk of metal on the kitchen table. I just can’t deal with this right now, I thought. I have too many other things to worry about, and Wheel of Fortune is about to start.

And there the medal stayed, taunting me day after day with its hokey logo and its crumpled neck ribbon. I grew to despise—even loathe—it. Why didn’t they just send me a gift certificate, or a water bottle, or a nice pair of socks? I would have even settled for a couple of GU packets.

Finally, unable to endure the torment for another waking second, I resolved to take action. Based on my rudimentary understanding of human psychology—garnered from my introductory college psych course, the Jodi Arias trial, and Shutter Island—I concluded that in order to let go of my debilitating resentment of this object, I had to live out the experience—or more precisely, the missing experience—that it symbolized.

Obviously, there was only one way to accomplish this, and even though I wasn’t exactly thrilled about it, I knew it had to be done. So, I put on my race outfit, pinned my number to the front of my top, did my hair and makeup (hey, it’s a re-creation—I’m allowed to take certain creative liberties), and placed the medal around my neck.

Then I did something that, under normal circumstances, I would never, ever, ever, ever, never, ever consider doing: I pulled out my iPhone and started snapping selfies with reckless abandon. (For those of you who aren’t hip to Millennial lingo, selfies are basically self-portraits taken with smartphones. And according to this article, they are “pretty much the most embarrassing photos you could ever take, and everyone thinks lesser of you because of them.”)

With that in mind, here is the product of my digital catharsis (Note: I hold the Phoenix 10K 100% responsible for what you are about to see): 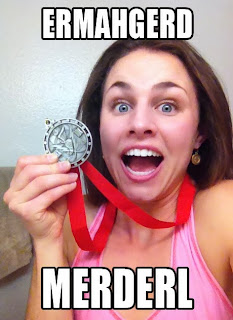 Posted by Brooke Andrus at 2:24 PM No comments: