Well, after nearly two years of successfully averting the need to purchase a gym membership through my hodge-podge patronage of hotel gyms, apartment gyms, and kitchen table gyms, I finally caved. In a moment of weakness, I signed my name on a dotted line and agreed to pay $30 a month to get sweaty with a bunch of dudes in bro tanks. (By the way, I am seriously disturbed by what I like to call the Bro Tank Invasion. It’s sort of like the British invasion, except instead of everyone jamming to the Beatles, everyone is wearing ridiculous sleeveless garments that were designed for the express purpose of making the wearer look like a total douchewad.)

Anyway, as part of my new membership, the gym offered—and by offered, I mean aggressively forced upon me—one free personal training session. I tried, multiple times, to politely decline said offer. I even canceled the first appointment I made in hopes that I might quietly fall through the freebie-gym-session cracks, never to resurface again. Instead, the receptionist just went ahead and rescheduled me for another day and time.

So alas, aside from pulling a full-on no-show—which is a total dick move, because even greasy, over-juiced personal trainers have important things to do and important schedules to keep to (otherwise, how would they have time for gym, tan, and laundry?)—I was not going to get out of this thing.

With my fate sealed, I tried to keep an open mind. I really, really tried. But I just couldn’t shake the feeling that my complimentary workout was going to be a total disaster. Call it women’s intuition, call it five years of following Division I strength training programs—any way you slice it, I just couldn’t drum up the naivety necessary to respect personal trainers as real experts in exercise science.

When I arrived at the gym, I noticed a sign at the front desk advertising an upcoming educational workshop where you could earn a personal training certificate in just three days for only $399! So, while I spent my collegiate career following lifting plans carefully designed by professionals who’d spent years studying the intricacies of human kinesiology, I was about to entrust my health and wellbeing to some guy who attended a three-day seminar. Fantastic.

When I met my trainer—let’s call him Miguel—I could not help but notice that he was approximately 17 ½ years old. I also could not help but notice the not-so-subtly placed body fat percentage caliper directly in front of the chair where he invited me to take a seat. Clearly he knew that I, like all women, came to the gym in search of a cheaper, less invasive alternative to liposuction. (Cue eye roll.)

I was eager to get right into it—and, ahem, get it over with—but Miguel wanted to go all the way through the standard initial evaluation he’d probably learned about mere days prior. First, we talked about goals. What follows is a rough transcript of our conversation.

Miguel: So, Brooke, I see you signed up just a couple of weeks ago. What spurred you to join our gym? What are your goals for yourself?

Me: Well, uh, I signed up because the equipment in the workout room at my new apartment complex appears to be missing some very important components and also there are signs all over the place that say, “Use at Your Own Risk.” So, despite being a known and unabashed cheap-ass, I could not justify risking serious injury in the name of saving a few bucks. As for goals—well, mostly just maintenance and injury prevention. I’m a distance runner, so I’m not looking to get huge or anything.

Miguel: Hmmm, OK, OK. [Stalls as he fumbles for what to say next, as this scenario did not come up during the role play portion of the seminar.] So…you, uh, aren’t looking to like, lose five pounds, or gain five pounds, or anything like that?

Me: [Raising one eyebrow for 15 silent, uncomfortable seconds.] No.

Miguel: Right. I mean, I didn’t think you did. Or that you needed to. OK, well, let me tell you a little bit about what we do here at El-Lame Fitness.

Miguel proceeded to explain the philosophy behind the traditional Monday-Wednesday-Friday lifting schedule and to give me a short lesson in delayed-onset muscle soreness. At various points throughout his lecture, he stopped and—using a vaguely condescending tone of voice—posed questions to help frame his spiel. These included things like, “Now Brooke, can you tell me why our muscles feel sore after we work out?” Or: “Brooke, do you know why rest days are so important?” And even: “Can you guess what you need to eat to help your muscles repair and rebuild after a hard lift?”

Then, just to drive home his extremely important point about muscle recovery, he supplied a hand-drawn illustration, which I’ve reproduced below. (Side note: he had obviously practiced producing this figure several times, as he was able to draw it upside down with ease. I found this slightly more impressive than those waiters at Macaroni Grill who sign their names upside down on the paper tablecloth.) 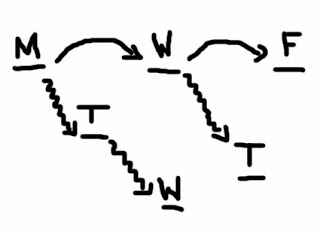 When lesson time was finally over, he asked me what cycle I wanted to do that day: push, pull, or legs. (FYI: push and pull are both arm-exclusive workouts.) I told him I’m not really into the specific-muscle-group-on-a-specific-day thing, and I gently suggested we do something more circuit-like.

Now look, I know my sales experience is minimal (I’m still trying to get over the fact that I was the lowest-selling member of Brownie Troop #4408 during the 1996 Girl Scout Cookie season), but I always thought the first rule of sales was to give the customer what the customer wants.

So, if you’re trying to sell me on purchasing additional training sessions, maybe it would be a good idea to adjust the workout to suit my preferences rather than forcing me into a program I am clearly not interested in following. In my mind, this would be akin to telling a waiter you’re vegan and then furiously clenching your teeth as he launched into a longwinded sales pitch for the succulent bacon-wrapped filet mignon.

But there was no changing Miguel’s mind. There was no time for circuits during the three-day seminar, and that meant I had a decision to make. I reluctantly chose “push.” And push I did. Naturally, my arms were fatigued about three minutes into the workout. I begged Miguel to let me do some squats or lunges or calf raises or anything that involved the muscles below my waist. But he was ruthless. Finally, when I could barely lift my arm for a half-hearted fist-bump, Miguel announced that I would be ending the workout with push-ups.

“Are you effing kidding me right now?” I protested.

“Nope. Drop and give me ten.” He demanded.

I dropped all right. I dropped straight to the floor when my arms gave out beneath me on my first rep.

“Get down on your knees if you have to,” Miguel suggested.

At that point, angry annoyance gave way to full-on rage. In my world, girl push-ups are a form of public humiliation. I would sooner pick a wedgie while knowingly walking in front of Brad Pitt than voluntarily complete a girl push-up in the middle of a crowded gym. But Miguel made me do it, and now I am scarred for life. (Literally. The friction from the carpet on the floor tore open the skin on my knees and there’s a pretty good chance I contracted staph.)

When I finally rose to my feet, blood trickling from my carpet-burned knees and daggers shooting from my eyes, Miguel knew he'd lost the sale. In fact, he didn't even ask me if I'd like to purchase a personal training package—probably the smartest thing he'd done all day.

And now, just because, here's the movie clip where I am pretty sure Miguel learned his sales skills: