A couple of weeks ago, I received some very concerning news.

Don’t worry, it’s not cancer or anything. Although if I’m being perfectly honest about my health, I will divulge that a recent routine health screening revealed that I, Brooke High-Strung Andrus, suffer from high blood pressure. Shocker.

No, this particular bombshell came not from a medical professional, but from the infinite Internet time-suck known as BuzzFeed. The undisputed king of trivial lists, laugh-out-loud GIFs, and snarky commentary recently ventured into new territory: interactive quizzes.

Now look, I am fully aware that these quizzes are the epitome of meaningless frivolity—a digital metaphor for everything that is wrong with America. But like KFC, Lunesta, and Here Comes Honey Boo Boo, these silly little questionnaires are habit-forming. Eventually, you simply won’t be able to go on with your day until you know BuzzFeed’s opinion on which Girl Scout cookie you are or why you’re single. They’re basically the Generation Y equivalent of newspaper horoscopes, and most of the time, the results are pretty harmless. You might think, “You know what? I am a Tagalong. Thank you for enlightening me to this very important analysis of my personality, BuzzFeed!”

But every once in a while, you’ll get a result so horrifically appalling that it will stop you dead in your tracks and force you to completely reevaluate your life. Such was the case when I took the quiz titled “Are You Ready to Have Kids?” Here’s was BuzzFeed’s advice to me: 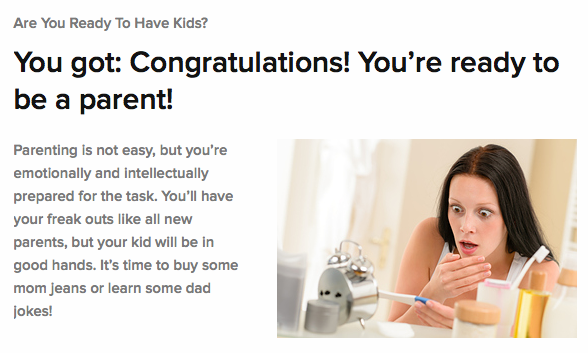 Yeah. Scary. Obviously, I had to take BuzzFeed’s two cents on this particular matter with a grain of salt. I mean, let’s be real for a second: I live in an apartment with a hot water heater the size of a beer keg and shoddy electrical wiring that prevents me from running the dryer and the microwave at the same time. I put off removing moldy, rotting leftovers from my refrigerator in hopes that a tiny fridge fairy might come along and take care of it while I sleep. Perhaps worst of all, I believe it is 100-percent acceptable to wear socks that look like this, because come on, the rest of the sock is still totally fine: 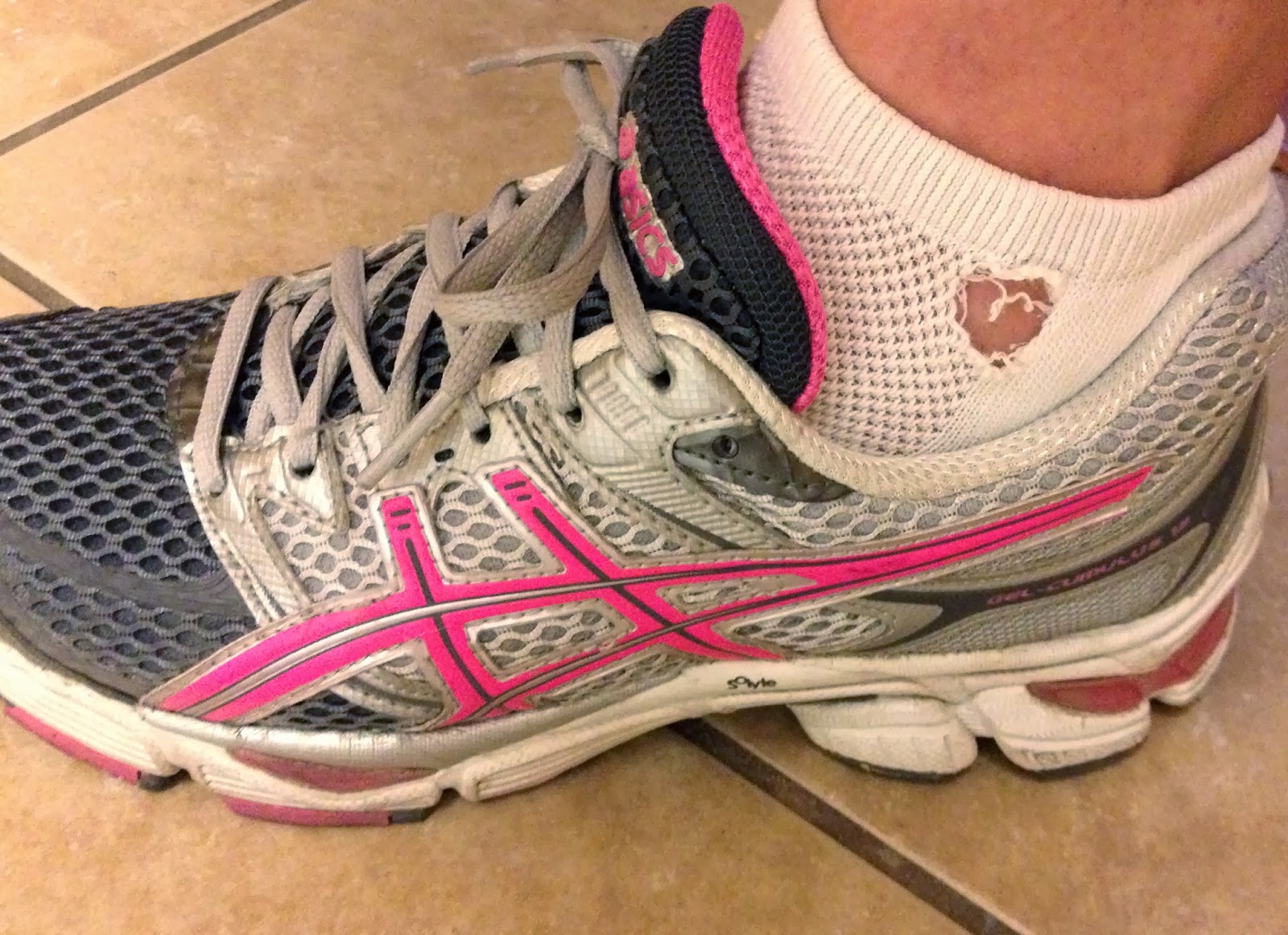 As you can plainly see, approximately 99 percent of the sock remains intact.

Also, I have to question the accuracy of any quiz that doesn’t offer “Every Taylor Swift Song” as possible answer to the question “What’s your relationship status?” Still, even with such glaring fallacies, I knew the quiz couldn’t be completely devoid of meaning. I just had to read between the lines a little bit.

Clearly, the BuzzFeed powers that be didn’t just take my quiz answers at face value; they used them as a series of tiny windows from which they caught a series of tiny glimpses into my very soul. And from the sum of those glimpses, they drew the only logical conclusion they could: “Here’s a woman whose idea of a great Friday night is a bottle of Yellow Tail and a shitty David Duchovny movie on Netflix. Seriously, could she be any more uncool? Jeez, lady, go lease a Dodge Grand Caravan already!”

After noodling on it a bit, I concluded that the quiz geniuses at BuzzFeed weren’t actually telling me to have a baby; they were merely telling me to stop acting like I’m about to have a baby. To stop being so predictable and responsible. To go out on some limbs and take some risks more daring than buying clearance meat or parking in a spot marked “For Jimmy John’s Customers Only” before walking straight through the doors of Chipotle. (To be fair, I really did feel like I was living on the edge of the law. It said violators would be towed at the owner’s expense!)

So, as an answer to BuzzFeed’s desperate plea for me to stop wasting my youth, I pulled the most insanely reckless move that a straight-laced distance runner could possibly pull: I signed up for a 5K race mere hours before start time. Okay, okay, look: I’m never going to be Justin-Bieber-drag-racing-crazy, or even Tom-Cruise-couch-jumping-on-Oprah-crazy. But check this out: I didn’t taper at all, I drank multiple beers the night before the race, and I ate a pre-race dinner most competitive runners would consider pure suicide: spicy Italian sausage pizza.

If I still haven’t convinced you of how coco-bananas my spontaneous race sign-up truly was, take a look at this flowchart depicting my normal decision process for race entry:

But I didn’t limit my new, more carefree lease on life to the registration process. Oh no. When I arrived at the race to find that there were approximately 12 available toilets for a crowd of nearly 2,000 runners, I made the quick—and spontaneous—decision to forego my warm-up in favor of evacuating my bladder. When I caught myself waffling over whether to wear my long-sleeve top in the race—chilly morning, no warm-up jog—I promptly shut down the internal debate that was raising my blood pressure more and more by the second and spontaneously ditched my pull-over. And when, about a half mile into the race, I noticed that my forearms were going numb from the cold, I shrugged it off and thought, “Meh. Give ’em another mile.”

With about 1,000 meters to go, I zeroed in on a woman in the distance—the female leader, as far as I could tell. Instead of hemming and hawing over whether my legs had enough gas left in the tank to catch her—as my former, baby-ready self might have done—I picked up the pace without allowing a single “Should I?” to cross my neural pathways. And when I surged past her with the finish line in sight, instead of stressing over whether she would come back to edge me out in the end, I thought, “Let’s wrap this thing up so I can get my free pancakes.” (Yes, there were free pancakes—I didn’t throw the decision chart completely out the window.)

And as I consumed said pancakes while enjoying a bit of entertainment at the expense of the poor soul who was conned into wearing a plush pancake costume—again, the decision chart still applies here—I felt content with both my performance and my newfound personal philosophy of spontaneity.

Even during the awards ceremony, when I found out that I not only did not win but was, in fact, beaten by nearly a minute, I just shrugged my shoulders, nodded my head, and clapped my hands for the badass runner lady who was so fast that I didn’t even see her during the race. (Hey, at least I didn’t take yet another page from my girl T-Swift’s book.)

To be honest, I was kind of impressed with my own maturity. No wonder BuzzFeed thought I would make an excellent parent. Clearly, any children of mine would be perfect pictures of poise and sportsmanship—even if they had a few holes in their socks.
Posted by Brooke Andrus at 7:05 AM 2 comments: