According to recent reports, actress (if you can even call her that anymore) Lindsay Lohan is being sued by a Nevada-based spray-tan company over an alleged unpaid tab of some $41,000.

When I heard this story, I was dumbfounded for two reasons:

(1) Who in their right mind allows Lindsay Lohan to purchase something on credit? 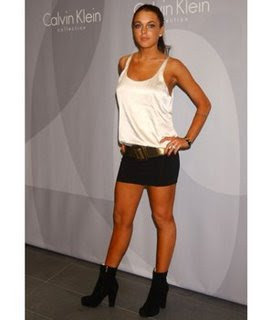 Granted, I’m sure no one, other than LiLo’s busy legal team, would take on the challenge of defending her sanity. But regardless of whether she is sober or mentally stable, I’m pretty sure she’s not blind.

I do have to admit, I kind of feel for poor Lindsay—when it comes to her skin tone, that is. (I don’t want to be accused of condoning cleptomania, alcoholism, or Labor Pains.)

You see, I too suffer from extreme epidermal pallidity due to the misfortune of inheriting 50 percent of my genes from a redhead. After years of denial, I have finally accepted that my skin rejects any and all shades between “almost transparent” and “so burnt it hurts to stand in a stiff breeze.”

On a recent trip to Phoenix, my mom and I spent the afternoon sitting by the pool—under umbrellas. As the sun moved across the cloudless sky, we chased the shade around the pool while other hotel patrons oiled and rotated their way to perfectly sun-kissed skin.

But I wasn’t always so at peace with my pastiness. Like Lindsay, I did some pretty stupid things in an attempt to cheat nature—though to be fair, none of them resulted in a debt of forty grand.

During my freshman year of college, I had my first experience with indoor tanning. With the encouragement of my roommate—who spent her summers working as a lifeguard—I marched over to the campus salon and purchased a tanning package. For years, my self-confidence—on the track and off—had been compromised by my blinding whiteness.

Whenever I lined up at the start of a race, I couldn’t help but feel athletically inferior to the girls whose golden complexions exuded an aura of physical fitness. Of course, my theory on the relationship between tanness and athletic ability was rarely supported by actual race results.

Still, there was no changing my mind. While other UM co-eds flocked to the tanning salon in preparation for their spring break trips to Cabo, it wasn’t the allure of a bikini-ready glow that drew me in to the tanning bed. I just wanted to look fast in my track uniform.

Around the time that my tanning punch card was nearly full, we had our first 70-degree day of the spring. I went to practice in shorts and a tank top, feeling bronzed and confident. When nobody commented on my beach-worthy tan, I grew concerned. Finally, I approached one of my friends on the team.

Apparently, in spite of all the time, money and dangerous UV exposure I had invested in my pursuit of the perfect artificial tan, I ended up looking only slightly “less white” than before and increasing my risk of developing skin cancer by 75 percent.

In short, it wasn’t worth it, and in a few weeks I was back to looking like this: 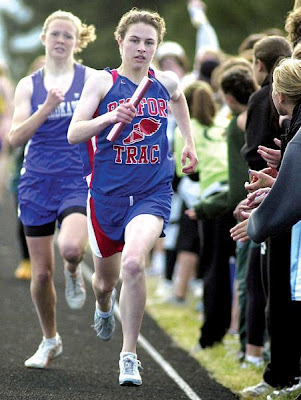 By my junior year, I had pretty much accepted the fact that I was destined to be pale. I wore sunscreen regularly and quelled my envy of tan competitors by imagining them in 25 years, once all that sun damage had turned their skin into a leathery, wrinkly mess.

Then one day, after the weather had taken a turn for the warmer, one of my teammates suggested that we get spray tans together. I was reluctant at first. All I could think about was that episode of Friends—you know, “The One with Ross’s Tan.” With the conference championships coming up, I didn’t want to look ridiculous.

Over the next few days, we somehow convinced ourselves that we’d be alright as long as we followed all of the precautions and stuck to the lightest shade. So, with only a few days to spare before the championship meet, we booked our appointments, exfoliated our entire bodies, and set out to get our skin dyed.

From the moment I was led to the misting chamber by an orange-hued, bleach-blonde 16-year-old, I knew I was in trouble. When I asked her to take the wad of gum out of her mouth and repeat the instructions, she looked at me like I was the idiot. These are the actual words she said to me:

“Just, like, stand there for a little bit so it can, like, spray you, and when it, um, beeps or something, turn around so it can spray you some more.”

My gut told me to ditch my plastic hairnet and get out of there immediately. But before I could grab my towel and open the door, the lights started flashing and the misting jets started spraying. Bailing was no longer an option—my front side had already been exposed to the mist, and I certainly didn’t want to pull a Ross Geller.

I was under the impression that the tanning chemicals would take effect immediately. This was not the case. I left the facility looking pretty much the same as I did when I went in. I was told it would take a few hours for the color to fully develop.

About an hour later, my tanning partner-in-crime texted me: R U tan yet?

I sprawled out on the couch for an afternoon nap. When I woke up, the situation had changed dramatically.

I staggered to my bedroom, my eyes still heavy with sleep, and turned on the light. When I looked in the mirror, I was instantly wide awake. And I was tan. Really tan.

I grabbed my phone and texted my friend again: Update: I’m tan.

Somewhere in the lowest depths of my soul, I had a feeling that this was too good to be true. Still, feelings of happiness and confidence overshadowed any sense of foreboding, because dang, I looked good.

When I woke up the next day, I noticed that my tan had taken on more of an orange tint, but I was still mostly satisfied with it, and I was excited to show it off at practice.

By 3 p.m. both my friend and I were growing increasingly concerned about our new tans. I was trying to convince myself that it only looked orange in certain lights, and that everything would be okay in the natural light of the sun.

I have created the following photo illustration to demonstrate what I looked like approximately 30 hours post-tan: 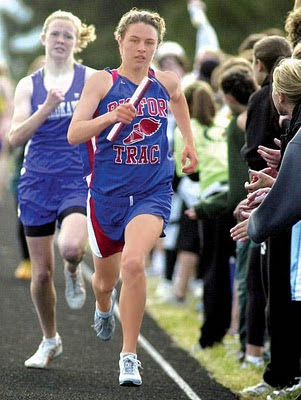 With my worst fears confirmed, panic set in.

I bolted to the shower, grabbed the most abrasive loofah I could find, and started scrubbing feverishly. Twenty minutes later, I dried myself off, looked in the bathroom mirror, and started weighing the threat of punishment for skipping practice against the embarrassment and ridicule I would surely endure if I showed up.

My skin was a splotchy mess of white and orange. I looked like an Oompa Loompa with a botched chemical peel: 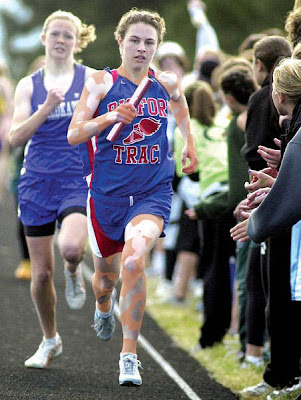 With no time to think, I threw on a pair of half-tights and a long-sleeved t-shirt, even though it was at least 75 degrees outside. I prayed no one would notice the orange blotches on my calves.

I spent an hour scrubbing my skin in the shower that night. By the time I gave up, I had all but removed my top dermal layer. The orange patches, though faded, were definitely still visible.

Tired and humiliated, I dragged myself to the kitchen to get something to drink. When I opened the fridge, a certain yellow fruit caught my eye—the same sour, citric fruit whose natural bleaching powers have been exploited by humankind for centuries.

I sliced the lemon in half and squeezed as much juice as possible into a bowl. Then, using a basting brush, I began painting my legs with citrus. I’m not sure why we had a basting brush or how I was able to find it in the kitchen when the most complicated meal I’d ever prepared was a grilled ham and cheese sandwich, but I do know that I immediately regretted my decision to cover my skin in lemon juice.

You know how acidic foods sting your tongue if you’ve recently burned it on hot coffee or soup? Well, after my extensive loofah-scrubbing session, my entire body was basically one big raw tongue, and that lemon juice hurt. Like. The. Dickens. I gritted my teeth and kept slathering on the juice. I apologized to my skin for the hell I’d put it through and promised to never do it again.

I finished with a coat of Jergens and crawled into bed.

The next morning—T-minus two days until the conference meet—I awoke to find that the orange blotches had lightened considerably. After scrutinizing myself in the mirror for several minutes, I finally decided that nobody would notice the slight discoloration if they weren’t specifically looking for it.

So, what can we all learn from this story? First, it’s better to just be who you are than to waste time trying to be something you’re not. Second, never purchase products from a business whose employee dress code allows for tube tops and platform flip flops. And finally, if you’re going to buy a spray tan, pay with real money so you don’t find yourself in the middle of an embarrassing lawsuit.

Posted by Brooke Andrus at 8:32 AM