Wishing you had invented something is one thing. I don’t know how many times I’ve kicked myself for failing to invent the Snuggie—I mean, it’s really just an oversized backwards robe. Genius!

But actually inventing something and then watching in horror as some other schmuck totally hijacks your idea—that’s a whole different animal. It pains me to admit that I have not once, but twice been the victim of such intellectual thievery.

It all started a few summers ago when we took a family shopping trip to Spokane. My mom insisted that we stay downtown, so we booked a hotel room in the heart of the city. The problem was, we had brought the family dog along (because she was much too needy and spoiled to spend three days in a boarding kennel) and the nearest grass was several blocks away.

Of course, my dad and I were charged with the responsibility of escorting the dog to said grass multiple times a day. After our fifth or sixth trip, we decided there had to be a better solution to our predicament.

Me: Seriously, I can’t believe we have to walk half a mile just to get to a stupid four foot by four foot patch of grass.

Dad: I know. I’m considering ripping up that piece of sod and carrying it back to the room.

Me: Hmmmm. That’s actually a pretty good idea. Maybe we should invent something like that.

Dad: I doubt very many people with dogs stay at overpriced downtown hotels.

That was the extent of our conversation. The idea always stayed in the back of my mind, but I never acted on it. Big mistake.

A few years later, I was flying to California for a race when I came across the following ad in Sky Mall: I almost spewed my tomato juice all over the page. Someone who had more business sense and initiative than I did had taken my idea (MY idea!) and turned it into a wildly successful enterprise. How dare they!

I promised myself that I would never again ignore my entrepreneurial instincts. Clearly, I had a gift, and I needed to sit back and allow my mind to develop its next million-dollar idea.

A few years later, I was training for cross country season when I came down with a serious case of plantar fasciitis. I was confined to the elliptical machine for six weeks—during the summer. For a runner who lives in a state where summer lasts three months and winter takes up the remaining nine, indoor workouts throughout July and August were a veritable form of torture.

Day after day, I powered through the monotony that is the elliptical. My mind grew numb. The summer sun taunted me through the window. I imagined being outside, felt the warm breeze against my face as I glided down the street. Then, like a shoe to Dubya’s head, it hit me.

There had to be a way to adapt the technology of the elliptical machine to a road-friendly piece of exercise equipment. I mean, there are stationary bikes and mobile bikes, right?

As the wheels started turning (no pun intended) I realized that this could be the beginning of the next fitness empire. Forget Suzanne Somers and Chuck Norris—that is, of course, unless they wanted to sign on as official spokespeople for the GliderRider. That’s right, I even named it.

There was no way I was going to let this one slip through the cracks like that stupid dog toilet idea. I couldn’t wait to get started. All I needed was a large financial investment, a mechanical engineer, and a TV spot on HSN.

Well, I got kind of hung up on the investment part, which made the engineer part pretty much impossible. The whole operation was stalled by mid-August. Then my foot healed up, which meant I was spending considerably less time on the elliptical at the gym.

Just when my big plan had been pushed passed the backburner and almost completely off of the stove, I browsed another issue of Sky Mall during a recent flight to New Jersey to visit my boyfriend’s family. As if a trip to New Jersey weren’t enough to ruin my day, imagine the outrage I felt when I turned the page and saw this: 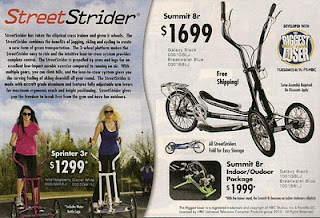 My eyes bulged in disbelief. Once again, I had failed to follow through on a brilliant invention that undoubtedly would have brought me immense fame and fortune.

I cast my eyes downward in shame. I didn’t want to admit that I couldn’t be trusted with my own genius, but deep down I knew it was true.

I’m happy to report that with the loving support of friends and family, I was able to move past this dark time in my life. I’ve got my next big idea on the stove, and this time I’ve decided to seek out help to ensure that it’s brought to a full boil. More to come in my next post.