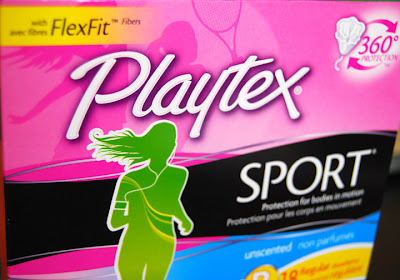 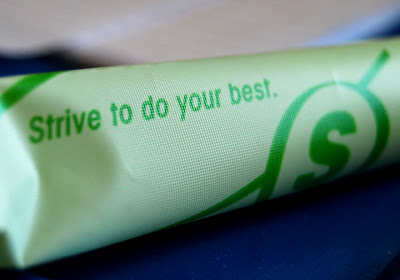 It’s a cold winter day, and you really, really don’t want to run. Somehow, you force yourself out the door and head for your go-to winter running path—you know, the one that’s plowed and, consequently, very popular among fellow diehard runners.

You pass by other trail users, smiling and nodding. With each nod and nod-back, there is a silent exchange of words: Howdy. I see that you’re running, even though you probably didn’t want to. Yeah, I didn’t want to either. But that’s why we’re so much more awesome than everyone else.

Your ego inflates to gargantuan proportions. If your ego were a bubble, you would look like the Epcot ball floating down the path. You feel snug in your runner self-righteousness. Running is definitely the best decision you’ve made all day—better, even, than the whole grain Pop-Tarts you had for breakfast this morning. (Because hey, anything made with whole grains has to be healthy, right?)

In the distance, you see a group of runners heading your way. They’re all bundled up in Helly Hansen half-zips and Under Armour compression tights. Their wardrobe, along with their synched, effortless strides, tells you that they are for serious.

Suddenly, your self-esteem is threatened. These guys are way too cool for you. Your heart skips a beat as you adjust your posture and try to appear as legit as possible. As they draw nearer, you stifle your heavy breathing and quickly try to decide between giving an up-nod or a down-nod. Up-nods are usually reserved for bouncers, football players and Jersey Shore cast members. I don’t want to look like an asshole. But a down-nod implies that we are somehow on the same level, which clearly, we are not…

Before you can make a decision, you give an involuntary full-body up-nod as your legs slide out from under you. Your butt hits the ground on top of a thin sheet of black ice—a booby trap of embarrassment.

1. Sit on your butt, looking pathetic and helpless, and hope they take pity on you by not ridiculing you (to your face, anyway).

2. Quickly get up, recover, and pretend like nothing happened, hoping they will do the same.

3. Flip a 180 and take off in the opposite direction as fast as humanly possible so that you won’t have to face them.

Not that I would know anything about this, because this definitely did not happen to me recently, but I’m kind of leaning toward option No. 3. If you’re fast enough, there’s a good chance they’ll never get close enough to identify you, which means you won’t have to drive across town to run for the rest of the winter. Also, it’s a good way to mimic the fight-or-flight adrenaline most people experience on race day.

Just make sure you watch out for black ice.

As most of my loyal readers are well aware, I have a small beef with TSA. Actually, it's kind of a big beef. Like a 40-ounce porterhouse steak-sized beef. Whenever something goes wrong for me during a trip that involves air travel, I almost always find a way to blame it on the Transportation Security Administration. (And if that doesn’t work, I just blame George Bush like everyone else.)
Last weekend, I had the great fortune of traveling to Phoenix to visit my best pal from my college running days. (Who, by the way, is one of the loyal readers I’m talking about.)
From the moment I arrived at the airport, I couldn’t stop smiling. I could barely contain my excitement about (a) seeing my friend, and (b) standing (and running!) outside without seeing my breath.
I was in such a good mood that the hassles of going through the airport security line didn’t even faze me. I happily removed my coat, sweater, scarf, shoes, belt and hair pins. I grinned as I passed through the metal detector without a hitch. I think I might have even winked at one of the agents.
But when I got to the other side of the X-ray machine, I was troubled to find that my bag was not waiting for me. I was even more troubled when I saw an agent walking toward me with my bag. Then came the dreaded, “Miss, is this your bag?”
Me: [My mood instantly shifting from happy-go-lucky to visibly perturbed.] Yes.
TSA-hole: [In the dry, unsympathetic tone typical of TSA employees] Did you check a bag, or have you considered checking a bag?
Me: [Starting to get annoyed] No. It’s a total rip-off.
TSA-hole: [Ruining my immaculate packing job as he rummages through my personal belongings and pulls out every bottled/jarred/tubed product he can find.] Well, you might want to think about it, because I can’t let you through with any liquid containers larger than three ounces.
Me: [Now becoming legitimately pissed off] Yeah, that’s not gonna happen. This little airline scheme doesn't fool me for a minute. I know I could buy a whole new set of toiletries for what it would cost to check this bag.
TSA-hole: [Holding out my brand-new bottle of styling mousse in a taunting fashion] Then I’m afraid I’m going to have to dispose of this.
Me: [Contorting my face into the most menacing scowl I can muster, as I’m not very practiced in the art of menacing scowls] Fine. Are we done here?
TSA-hole: [In a fake-nice voice with a fake-nice smile] Uh-huh. Have a great flight.
I wanted to respond with something like, “Thanks. I'll think of this as a charitable donation, since you are clearly in need of basic hair products.” Instead, I pulled my things off of the table, smiled sarcastically and stomped away in my socks because I couldn’t stand to be in this loser’s immediate vicinity for another second.
When I arrived in Phoenix, I told my friend that I needed to make an emergency stop at Walgreens to purchase hair gel so that I wouldn’t look like Paula Abdul circa 1987 all weekend.
We got to talking about airport security, and she made the excellent point that when we were traveling to track meets with our college team, everyone was allowed to carry on their equipment—throwing implements, vice grips, spikes, etc.
The more we talked about it, the more I realized how insanely ridiculous it was that I made it through security on multiple occasions with these: 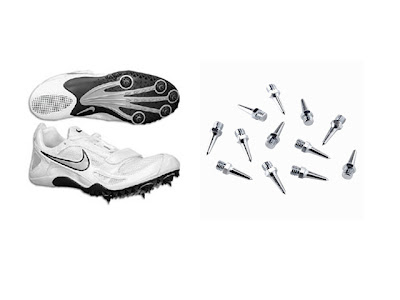 (Because only legitimate athletes would try to carry an item with a dozen needle-sharp metal objects protruding from its surface onto an airplane.)
Which are strikingly similar to this: 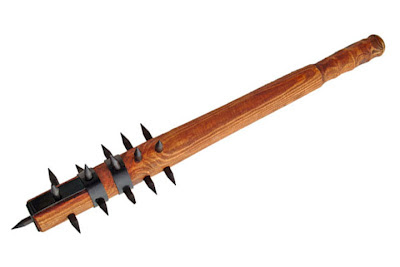 And are capable of this: 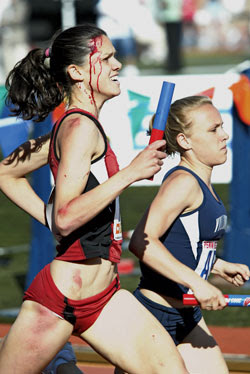 But heaven forbid you try to bring this:

(Because tamed flyaways and defined curls are telltale characteristics of violent terrorists.)
Which is capable of that: 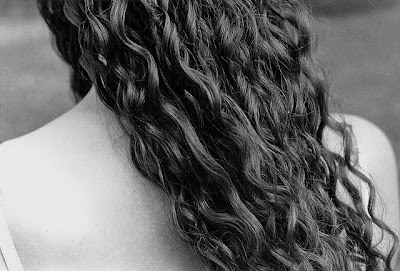 I guess TSA is just one more thing about the federal government that I’ll never understand.