Eight crazy things that happened at my Turkey Trot

In honor of this year’s rare convergence of Thanksgiving and the first day of Hanukkah—which, as every child raised in the Mountain West learned courtesy of Adam Sandler’s “Hanukkah Song,” lasts eight crazy nights—I have structured this Thanksgiving blog post around this sacred Jewish number. Think of it as a literary menorah. L’chaim!

1.) I won a pie. And in the process, I became enlightened to the immense motivational power of this hallowed circular pastry. Titles, medals, trophies, scholarship dollars—none of these even remotely compare to pie’s exceptional energizing quality. Every time I caught a glimpse of someone in front of me who could potentially stand in the way of me and my soft, buttery, flaky specimen of baked excellence, this was my thought process: She looks like she could be in my age group. Okay, her calves have wrinkles and she clearly reads every issue of AARP The Magazine cover-to-cover, but there is freaking pie on the line, and I’m not taking any chances. What if she’s like the female Benjamin Button? Beatrice Button, prepare to eat my dust. Then, a few minutes later: Hmmm...that’s either a 12-year-old boy with exquisite bone structure or Keira Knightley’s American doppelganger. Either way, I will not gamble with androgyny. Time to surge. 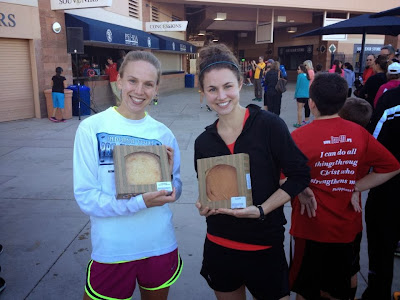 2.) I embarrassed myself while receiving said pie. Usually, when the time comes for me to accept an award, I am able to reign in my excitement enough to create a façade of maturity and sportsmanship. But when the award is pie, I completely lose my shit. (Which, I’m told, makes other race participants uncomfortable. Whatever.)

Actual video footage of me when they announced that I had won a pie. (Source: i.minus.com)

3.) A dude in rubber foot-gloves beat me. Perhaps my only regret of the entire day was failing to out-sprint the foot-shaped-flipper-wearing asshole I spotted in front of me near the end of the race. But alas, with my pie secured, I simply did not give enough of a hoot to rally my fast-twitch muscles (or what’s left of them) for a kick-driven statement against minimalism.

4.) I was nearly outrun by a “13-year-old” girl. (The quotation marks indicate my doubt of said girl’s given age.) Why the suspicion? For one, I refuse to believe that my athletic prowess is comparable to that of a middle schooler—a high-schooler, sure, but definitely not someone who just got the official go-ahead from the Motion Picture Association of America to watch Dumb and Dumber.

But more than that, a recent workplace step-counting contest tainted my trust in the competitive integrity of my fellow humans. Just as one can attach a pedometer to a Fido’s collar for a few hours to pad one’s weekly step totals, one can enter oneself in a less competitive age division in order to increase one’s chances of securing a pie. (Believe me, my running partner and I spent considerable time contemplating whether we could pass for a couple of 45-year-olds.)

5.) I ran a 5K “PR.” (The quotation marks indicate my doubt of the race course’s advertised distance.) As much as I would like to believe that I ran a community Turkey Trot faster than any of my collegiate 5Ks, I am a realist. Pie may be an incredible motivator (see item 1), but it’s not powerful enough to revert my body back to a level of fitness I will never again achieve.

6.) During the race, I burned a number of calories that represented a mere fraction of what I would later consume, but I nevertheless justified my consumption of said calories with the completion of said race. Like a dieter who hits up Dairy Queen for a “reward” after 25 minutes on the elliptical—I broke a sweat, which means I had to have burned at least, like 5,000 calories, right? One large Snickers Blizzard with extra chocolate, please!—I reasoned that my 5K effort would cancel out all the gluttonous activity on the docket for the rest of the day. 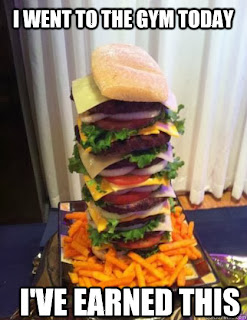 7.) I solved all my problems—save for the one above—courtesy of the problem-solving station. Yes, this is actually a thing, which begs the question: Where was it during that whole congressional standoff fiasco? 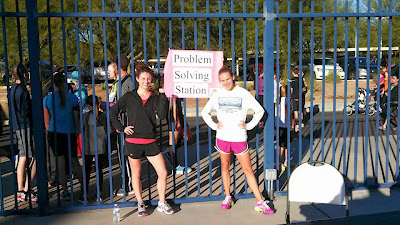 8.) I inadvertently shed my amateur status by offering my official endorsement of a commercial product. After the race, an Aquaphor rep offered my friends and me some free product samples on one condition: she had to take a photo of us holding them. So yeah, now that my celebrity is being used to market healing ointment, I am, by definition, a professional athlete. Eat your heart out, Mary Cain.
Posted by Brooke Andrus at 7:30 PM 2 comments: