Seniors say the darndest things. (No, it’s not a Bill Cosby-hosted television show featuring old peoples’ hilariously cute responses to random interview questions—although it totally should be. I think we can all agree that TLC is in desperate need of some fresh content. They’ve kind of overdone it on the whole freaks-and-train-wrecks-reality-TV front.)

I’m no Bill Cosby, but even in the absence of quick wit and colorful cable-knits, I seem to be a magnet for comical commentary from the 65-plus crowd—especially when I’m running. Well, comical to me, anyway. I’m sure some of these episodes fall into the “you kinda had to be there” category. But hey, this is my blog. I was there, and it’s not my fault that you weren’t. (Not that I want you stalking me or anything. That would be creepy and would likely result in you taking a pepper spray shot to the face.)

Anyway, in an effort to give you the most complete picture possible, I have prefaced each laughable one-liner with a few contextual details that should make you feel more like you were there, even though—again—it’s not my fault that you weren’t.

The time: Early morning (we’re talking pre-6 a.m.—prime senior-spotting time)
The place: Immaculately landscaped walking path in the middle of a bustling 55-plus community.
The character: An 80-year-old, 5’4” man in red swish-swish shorts, a striped polo shirt, and a khaki fishing hat.
The comment: “Are you sure you belong in this neighborhood?”
The response: Taken by surprise and unable to formulate a verbal response before leaving Gilligan’s Island in the dust, my running buddy and I instead burst into a weirdly synchronized nervous giggle and left it at that.

The time: Later that same morning.
The place: Residential road named for some Indian* tribe.
The character: A remarkably fit 60-year-old woman in Jackie-O sunglasses and a Jane Fonda leotard.
The comment: “It’s so good to see some young blood out here!”
The response: My 6-in-the-morning brain isn’t really capable of producing anything more expressive than a classic Echo Response (e.g., “Good morning to you, too!” or “What a beautiful day, indeed!” or “Yes, there are dead gnats all over my face!”). But that wasn’t really an option in this case. My friend and I talked over each other in an clumsy but good-intentioned answer that came out as something like, “We also you think awesome fit great exercise leotard!”

The time: Mere minutes after above incident.
The place: Main boulevard in the same neighborhood.
The character: A very tan, very enthusiastic 70-year-old man in a white Toyota RAV4.
The comment: “Hey! Stop! Stop! Come back!”
The response: My friend and I were split on this one. I—being the product of an upbringing with inordinate exposure to Dateline and Nancy Grace (courtesy of my mother)—did not acknowledge the motorist, instead picking up my pace and scanning the roadway for emergency escape routes. She, on the other hand, sauntered right up to the open passenger side window like a child who had just been offered candy and a puppy. Feeling slightly responsible for her safety, I backtracked to the open window, arriving just in time to hear our senior stalker proudly proclaim that he has run every day for the past 35 years. He then congratulated us for not being fat like everyone else in our generation. I politely thanked him for this “compliment” and ushered my friend away from the vehicle before he invited us into the back seat to check out his “race medal collection.”

The time: Early evening (another prime senior-spotting time—post-four-o’clock-supper but pre-double-gin-and-tonic-nightcap).
The place: Shaded walking path.
The character: A tall, slightly overweight man in plaid cotton shorts, long tube socks, and black sneakers. At his side: an energetic, impeccably groomed wire-haired fox terrier.
The comment: “What high school are you with?”
The response: Five seconds of awkward silence followed by five seconds of awkward laughter. Unsure of whether we should be flattered or offended, my friend and I fumbled for a witty comeback. We were nearly out of earshot when I finally chimed in with: “Oh, we’re out of high school.” She quickly added: “Yeah, we’re out of college!” Of course I am totally kicking myself now, as it would have been huh-larious if we’d advised him to get his eyes checked because we were actually a couple of retired widows.

The time: Early evening.
The place: Wide, well-maintained public sidewalk.
The character: Friendly elderly gentleman on a recumbent bike.
The comment: “You’re going ten miles an hour!”
The response: “LIAR!” (OK, I didn’t really say that, but it was obvious that he was either Canadian or Confused—Canadian if his speedometer was actually in kilometers per hour, and Confused if he simply forgot how to do numbers in the midst of a brief “senior moment.”) In reality, though, we politely moved to the edge of the path, let him pass, thanked him for the rate of motion estimate, and quietly debunked said estimate based on the fact that it was over 100 degrees outside and there was no way in hell—literally, because I’m pretty sure Dante’s first circle of hell is actually Phoenix, Arizona—that we were churning out six-minute miles.

The time: Later that evening.
The place: Drinking fountain on the border of the local golf course.
The character: Doc from Snow White and the Seven Dwarfs (minus brass buckle belt, add fanny pack).
The comment: “I’ve got a bar of soap if you want it.”
The response: To put this comment into context, imagine two sweaty, panting, half-clothed runners (us) splashing cold water all over our heads, faces, shoulders, necks, chests, and arms. I mean, we might as well have climbed into the basin of this drinking fountain—and probably would have had we not been concerned about compromising its structural integrity. Anyway, we were so surprised by the sharp-witted humor of our white-haired onlooker that we froze mid-bath, looked at each other with raised eyebrows and pursed lips as we warded off a bout of hysterical laughter, and muttered something about how nice and cool the water was. Once we were a safe distance away, we let loose all of our pent-up giggles and, after we’d caught our breath, decided there was a strong possibility that Mr. Magoo was actually serious about the soap because heck, you never know what old people are carrying around in those giant waist pouches with their IHOP coupons and their jars of Cetaphil.

Well, that’s it for this week’s edition of Seniors Say the Darndest Things. Join me next time when I delve into sexting, thong underwear, and other inappropriate topics of conversation for retirees having boozy dinners at family pizza restaurants. 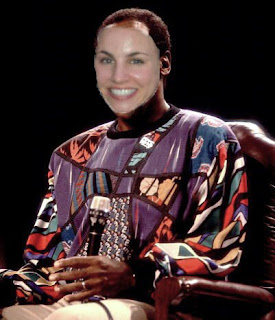 *Should this be Native American? I can never keep up on what’s PC these days.
Posted by Brooke Andrus at 3:17 PM No comments: