Each year, as we approach yet another dropping of the ball, I always wonder how many people actually stuck to the New Year’s resolutions they made the previous January. My guess is that the success rate is less than 10 percent. Possibly even less than 5 percent, due to the fact that a lot of people lie.

From my own personal observations, this is what I know: In January, everyone is a runner. By December, the trails and treadmills are all but deserted.

Seriously, watch for yourself. If you’re a regular gym-goer, you’ll be astonished by the sudden onslaught of new faces (and the invariably out-of-shape bodies that go with them) after January 1.

The problem is, despite the best intentions of all those naive newbies, their discipline will inevitably fade as their daily workouts become weekly, then monthly, then nonexistent. I hate to be a Negative Nancy, but it’s true. As the cliché cynic in me would say, “I’m not a pessimist, I’m a realist.”

And precisely because I am a realist, I always establish a back-up goal for any aspiration I set out to achieve, especially when it comes to New Year’s resolutions. It’s a little self-esteem mechanism I came up with during my college racing days. Obviously, no runner has their best race every single time they compete. So, in addition to setting legitimate goals for each contest—time, place, championship qualification, etc.—I would throw in a couple of “fluff” goals that would be considerably less difficult to attain. These included things like don’t waste energy by passing too much at the beginning or try to put on a sweet game face as you’re gritting your way down the homestretch so you’ll look super-fierce in your media guide action photo.

It takes a long time to break an old routine. If your New Year’s resolution is to get in shape but your body isn’t used to working out, it will be difficult for you to adjust to regular exercise. This is where so many people go wrong. Instead of setting a realistic goal like I will start exercising every week, they go all-in from the get-go with resolutions like I will get up at 5 a.m. and bust out two rounds of P90X before allowing myself so much as a cup of coffee.

Although you might be able to sustain such a grueling schedule for a few days—maybe even a few weeks—you will not last. Such a dramatic change takes time, and you need to give yourself another option for the days when getting up at 5 a.m. just isn’t going to happen.

Here are a few examples of common New Year’s resolutions and some corresponding back-up goals.

Likely unattainable goal: I will run every day.
More realistic back-up goal: I will exercise every day. (Taking the stairs instead of the elevator and lifting dishes to the top shelf of the cupboard count as exercise.)

Likely unattainable goal: I will start cooking my meals from scratch using only fresh ingredients.
More realistic back-up goal: I will not eat more than two frozen pizzas a week.

By this time of year, I have usually settled into my winter hibernation den—a.k.a. the gym—for some quality time on the treadmill and the elliptical machine.

But since my gym membership has expired and I plan to put off purchasing a new one for as long as possible, I have been spending more time exercising in sub-freezing temperatures than usual.

Here’s the thing: don’t tell Gov. Brian Schweitzer or his bolo tie, but I’m not really a true Montanan. I mean, I live here, and I love it, but when the mercury drops, I turn into a real pansy.

My treadmill dependence, it seems, has finally caught up with me. Now that I’ve found myself without access to one, I have been forced to confront my cold-weather wussiness.

I have been running outside in conditions I would never have dreamed of stepping out in as my former self. As a result, my body is not adapted to move normally in such an environment. My usual quick, efficient stride has devolved into a stiff, lethargic lope.

My “winter pace,” however, has allowed me the opportunity to take in my surroundings with more detail than ever before.

During the snowy months of the Montana winter (October through June), wildlife sightings are usually few and far between. So, on a particularly chilly day last week, I was surprised to see a squirrel scampering across the road.

Actually, scampering isn’t really the word. It was more like the squirrel version of a slow-motion jog. Like, if there had been a bunch of squirrels, you could have filmed a squirrel version of the beach scene in Chariots of Fire. (Do I hear YouTube sensation?)

My speed-challenged, bushy-tailed friend struck a chord with me. I wondered why he, too, looked like he was caught in an invisible vat of molasses.

So of course, when I finally returned home, I went straight to the Google to satisfy my curiosity.

Turns out, squirrels—along with many other mammals—drift in and out of a state of reduced metabolic activity when the temperature drops. According to Wikipedia—which means there’s about a 50 percent chance of accuracy—it’s called “torpor.”

When an animal enters a torpid state, its heart rate can drop as low as four to eight beats per minute—per MINUTE. That’s like one heartbeat every 15 seconds!

Every now and then, when temperatures allow, the animal can come out of torpor and resume normal activity. But it’s not like they just 1-2-3-snap! out of it. So my little nut-hunting rodent pal had probably just woken up from the deepest sleep ever. Who could blame him for being a little groggy?

And that, my friends, sounds like a pretty good idea right about now. I think I’ll take a cue from nature, go brush my teeth and settle in for some nice, quality torpor.
Posted by Brooke Andrus at 1:56 PM 1 comment:

The run that put the Geo in ghetto

I was chatting on the phone with my mom the other day, mostly about my new job and my plans for Christmas. Then, completely out of the blue, she adult-ADD’d this into the discussion:

“Oh my gosh, Brooke, I couldn’t sleep the other night—I was just lying there wondering if you’ve been locking your doors at night. You should really have them locked all the time, especially in that neighborhood you’re in.”

I was taken aback for several reasons, chief among them the fact that our conversation about Christmas lights had somehow segued into a lecture on home security.

But I felt bad that I was the indirect source of my poor mother’s insomnia, so I patiently answered a barrage of annoying—though well-intentioned—questions.

“Yes, Mom, I always lock the door when I’m home alone….uh huh, and the deadbolt, too.”

“No, Mom, I really don’t think it would be necessary to install a panic room.”

“Uh-huh, I always stick to the main roads when I run…no, Mom, I would go insane if I ran on the treadmill every day.”

Although I put every effort into convincing my mother that I live in western Montana—not South Central L.A.—I secretly knew that her worries were not completely unfounded.

Mom, you should probably stop reading here. Seriously, if you want to sleep tonight, go back to watching Nancy Grace—I hear there’s an update on the “People’s Court Mom.”

The truth is, I’ve never felt completely safe in my new neighborhood. At first, I tried to get past its rough outward appearance by admonishing myself for being so judgmental.

Don’t be silly—I would tell myself—They can’t all be drug dealers.

When I was driving home for the second or third time, I saw a little boy out playing in his front yard. He appeared to be practicing his baseball swing.

See? It’s a family neighborhood. What was I so worried about?

Upon closer examination, however, I realized that the little boy was actually mercilessly beating a tree trunk with a large stick. That’s when I knew that if I was going to live here, I was going to have to toughen up.

On my first day in my new apartment, I decided to go on a timed run to explore the area and acclimate myself to my new environment. In 25 minutes, I passed two trailer parks, three junkyards, six stray cats, four front porches with sofas on them and eight Geo Metros. The farther I went, the more I found myself looking over my shoulder and clenching my fists—you know, just in case I had to go all Mike Tyson on some tweaked-out meth head.

When I got home, I felt like a snobby bitch for drinking soymilk and not having a mullet. But mostly, I felt scared, and a little bit guilty for making so many horrible assumptions about my neighbors.

Then again, everyone knows that an area’s crime rate is directly related to its per-capita density of outdoor sofas. 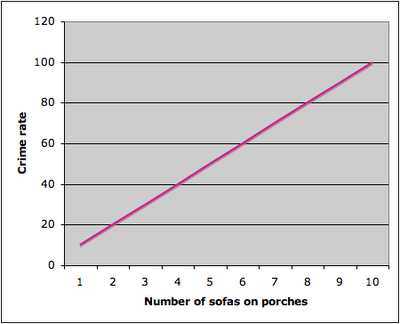 Still, I resisted the urge to log on to Family Watchdog to search my address, mostly because I knew that if I saw the results, I would probably stop running forever, and with the holiday season in full swing, that simply was not an option. There are too many hot buttered rums to be had.

I headed out the next day with an open mind, though I decided to stick to the roads with the most witnes—er, traffic.

About a mile into my run, I saw flashing red and blue lights up ahead. All I could think was: Drug bust.

In the 90 seconds it took for me to arrive at the scene, I tried reasoning with myself.

Don’t be ridiculous. It’s probably just a traffic stop. There are dozens of those every day. Even Geo Metros can get going too fast sometimes.

As I approached the police vehicle, however, I saw a large, handcuffed woman with a cop on either side of her. One was supporting her weight and holding back her hair as the other held an open vomit bag in front of her mouth. And yes—she was using it.

I made a loop around the block and headed for home at interval pace. At least living here will be conducive to speedwork. By the time spring rolls around, I’ll be in shape to PR in the 800.

In the meantime, maybe I will invest in some pepper spray.
Posted by Brooke Andrus at 1:50 PM No comments: