There’s nothing worse than running an entire race believing you are in the lead, only to find out upon crossing the finish line that you not only did not win, but in fact had your ass handed to you by a margin of more than two minutes.

OK, so maybe there are worse things. Like passing a kidney stone or being the photographer at the Jessica Simpson nude pregnancy shoot.

But trust me, it really, really sucks to be fooled into thinking you won something that you actually lost, as I discovered this past Saturday during my second attempt at the local St. Patty’s Day race.

You might recall that last year, I out-kicked a 15-year-old girl for a hard-fought-but-slightly-embarrassing 5K victory. It wasn’t one of my proudest moments, but what can I say? I’m a slave to my hypercompetitive nature.

This year, I decided to attempt the newly added 7-mile distance. Why? F@*% if I know. I generally run 4 to 6 miles a day, so I was in no way prepared to race 7. But what great moments in history were borne of preparedness? Do you think Lewis and Clark practiced traversing the entire American west before they set out on their famous expedition?

When I got to the starting line, I took a position approximately four rows back. My lack of confidence prompted me to go out very conservatively—like behind-a-dude-in-a-plastic rainbow-cape-conservatively. (On a side note, this spirited gentleman was dressed as the pot of gold at the end of a rainbow, which in my opinion is pretty much the most rad St. Patrick’s Day race costume ever.)

So while I was busy weaving through leprechauns and giant shamrocks, apparently there was some badass runner lady at the front of the pack who was working up an impossible lead over me and every other normal human female in the race field.

I finally got to the point where all of the runners in my immediate vicinity were men. Squinting my eyes, I could barely make out a few fast-moving figures in the distance. Naturally, I assumed that they, too, were men.

But you know what they say: when you assume, you end up losing races without even knowing it.

By the time I had made my way to the front of the man-pack, the leaders were so far away that I couldn’t even see them anymore. I came up on a couple of guys who were holding a decent pace. I hung behind them for a few minutes, testing the waters to see if they would accept me into their group. I felt like that weird shy kid on the playground who slowly edges his way into the sand box, hoping the other kids won’t notice. Before long, I felt comfortable enough to run right in the middle of these guys, unashamed of my labored breathing and intermittent grunting.

Around mile 5, my legs started to feel a little heavy. I knew that based on my training, I had reached my limit. I also knew that no matter how much I wanted to fall off pace, I couldn’t let myself falter because (a) if I let these guys go, I would have to suffer alone for the final two miles and (b) I was winning!

My breathing and grunting grew louder and more annoying. One of the guys in the group—probably tired of being distracted by my pathetic sounds of weakness—put on a surge. I watched the round sweat mark on his back get smaller and smaller as he moved farther and farther ahead. I knew I couldn’t let that sweat mark disappear. If I did, the next thing I knew rainbow cape guy would go flying by me, and that simply could NOT happen.

The sweat mark became my target. I gradually picked up my pace and moved closer to that moist, translucent splotch. With about a half-mile to go, I had made up most of the distance. As I listened to myself gasp for air, I wondered if it was acceptable for me to try this hard in a St. Patty’s Day fun run. Little did I know, there was someone sipping water at the finish line who had tried much harder than I did. Like two-and-a-half-minutes harder.

The finish came into sight just as I was beginning to experience some worrisome chest pains. I tried to quiet my breathing for the sake of dignity. Thank God I did not have the energy to do one of these as I crossed the line: 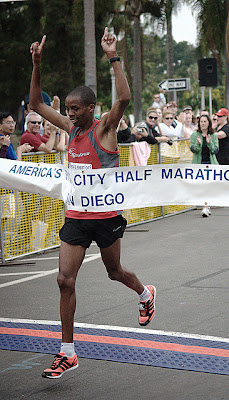 I smiled at the crowd as I stumbled down the finish chute. Some dude came up to me to collect my timing chip, and as I handed it over, I heard him say, “Great job! Second woman!”

Whoa, whoa, whoa, I thought. Did he just say “second woman?” Is he mental?

I limped through the crowd, desperately trying to find someone I knew and trusted—someone who could clear up the confusion and reassure me that this gentleman was obviously mistaken. No such luck. Instead, I heard snippets of conversations that confirmed my worst fear: I had lost without even knowing it.

Thankfully, all finishers over the age of 21 were entitled to a free beer. I whipped out my ID and gratefully accepted a cup of the best post-race recovery drink in the world (which also happens to be the best post-disappointment recovery drink in the world). Within minutes, I had forgotten the whole ordeal. The main thing was that I had successfully finished a 7-mile race without barfing or breaking something. Plus, I added this awesome beer mug to my sweet collection of fun-run swag: 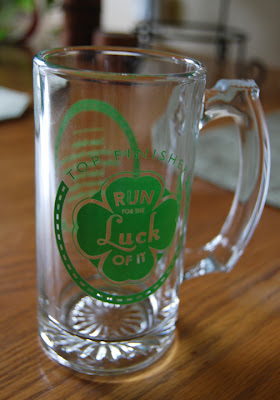 Posted by Brooke Andrus at 2:54 PM