Born to be shod

After years of resisting, I finally gave in and read Born to Run by Chris McDougall. 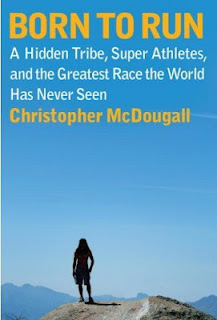 I say “gave in” because I definitely didn’t want to read it. My mom practically made me. Every time I talked to her, she would mention it.

“Oh, you have to read it,” she would say. “You just have to. It’s soooooo interesting, and he’s such a good writer. I think every runner should read it. Really, they should. Blah, blah, blah…”

I kept telling her no, I wasn’t interested in reading about some weird old dude who lived with a tribe of secretive Indians in the Mexican wilderness. I had much better things to do. Like shred old bank documents. Or alphabetize my spice cabinet.

In all honesty, I didn’t know much about the book other than its reputation as the catalyst of the minimalist running craze—which is exactly why I refused to read it.

By now, most of you are aware of my aversion to minimalism. It just seems ridiculous to me that anyone would choose a structureless, cushionless, laceless rubber foot glove—or worse, no footwear at all—over a shoe that was scientifically engineered specifically for running.

It seems even more ridiculous that anyone would completely abandon the footwear they have been running in their whole life as the result of one stupid little book. And yet, people all over the country have done just that—all because of Chris McDougall and his “Bible of Minimalism.”

My mom finally managed to pawn her copy off on me. It went straight to the bottom of the stack of reading material on my nightstand—beneath even the four-month-old issues of Us Weekly that had been passed down from my grandma, to my aunt, to my cousin, to my other cousin, to my mom and then to me. (Hey, I’m not going to pay for that crap. But I will read it. Don’t judge me.)

Eventually, my stash of fine literature shrank down to reveal the novel that I had somehow grown to despise without reading a single line. I sighed and picked it up.

Ok, McDougall. I thought. Let’s see what you’ve got.

My mom was right about one thing—he’s a fantastic writer. So fantastic, in fact, that I almost got sucked right into believing that I could run hundreds of miles in leather sandals eating nothing but corn mush.

The guy definitely did his research, and the science he presented was pretty dang convincing. All that stuff about Achilles tendons and glute muscles and heat regulation? Genius! He was clearly on to something. Maybe humans really did evolve as the greatest distance runners on Earth.

But any goofball with a journalism degree knows that it’s easy to prove a point when you include only the facts that back it up. (Or just make up your own, right Dan Rather?) The difficulty lies in constructing a balanced story that takes all sides into account.

So here’s the deal, McDougall: I buy your argument that we evolved as runners. But I think a more balanced approach to this argument would have at least mentioned the fact that our habitats have changed — and diversified — substantially since the dawn of humankind.

I mean, I hate to be that loud, politically incorrect friend who makes everyone else uncomfortable, but have you ever noticed how much you don’t look like a Tarahumara Indian? Or a Kenyan? Or a Kalahari Bushman?

Maybe some people are born with all of the equipment they need to run for hours on end, but they probably don’t have ancestors who rode horses and ate inbred livestock.

To put it in perspective, I have created the following series of charts displaying the changes in human lifestyles over time, both for the Tarahumara Indians (a.k.a. “The Running People”) and Caucasians (a.k.a. “The Lazy Assholes”).

No rubber footwear—or lack thereof—is going to make you any less biomechanically inferior to The Running People.

So, despite Chris McDougall’s best attempt to make me a foot-glove convert, I remain firmly committed to my belief that white people need shoes. And dance lessons.
Posted by Brooke Andrus at 12:46 PM