Never Stop (Especially after you cross the finish line because there are 20,000 people behind you)

Ever since I moved to Phoenix, I’ve had some variation of the following conversation with pretty much every local resident I’ve met.

Arizonan: So, you’re a runner?

Me: Yeah. I ran track in college, and I still run pretty much every day.

Arizonan: Have you ever done Pat’s Run?

Pat’s Run—an annual event that raises money for the Pat Tillman Foundation and honors the legacy of a fallen American hero—is the crown jewel of the Phoenix racing calendar. It’s essentially the last major race before the city again descends into the fiery depths of hell (a.k.a. summer) for approximately four months. It’s also the Valley’s largest running event of the year, with more than 20,000 participants.

It didn’t take long for me to ascertain that I would never truly be accepted into the Phoenix running community until I had at least one Pat’s Run under my belt. It’s a rite of passage of sorts—an initiation into the fraternity of fellow crazy people who scarcely bat an eye at the thought of logging several miles in triple-digit heat. So when I found out that my company was sponsoring a team—and offering to pay half of each participant’s registration fee—I took it as a sign from the Universe that it was my destiny to run this race.

By the way, the theme of the entire shebang—and the inspiration for the title of this post—is “Never Stop.” And let me tell you, the organizers of this race really live out their rallying cry to the fullest extent possible—as in, “Never Stop promoting this race until everyone within a 500-mile radius uses it as a go-to topic of conversation when making small-talk with hobby joggers,” and “Never Stop allowing people to register for this event, even when the size of the race field far exceeds the capacity that the race venue can comfortably support,” and “Never Stop running, even after you have crossed the finish line, because there are literally thousands of people coming in behind you and that shit backs up quick.”

All in all, the race itself was fairly uneventful. My performance was neither outstanding nor abysmal: I finished the 4.2-mile course in 25:27 (the distance is a tribute to Tillman’s jersey number as a member of Arizona State’s football team) to nab sixth-place honors in the women’s race. Now, that might seem somewhat impressive considering the massive list of entries, but keep in mind that the vast majority of “runners” in this race were not runners at all. In fact, I would estimate that the true “racing” field—that is, people who actually treated this event as a competition—consisted of about 2,000 people.

Anyway, the real challenge of Pat’s Run is arriving not at the finish line, but at the starting line. Here’s what I was up against:

Adding another layer of difficulty to the whole ordeal was the fact that I was flying solo. With no support crew to chauffeur me to the starting line and baby-sit my belongings, I had to plan very, very carefully. The night before the race, I hemmed and hawed over whether I should drive to Tempe—and deal with the headache of bottlenecks and parking wars—or take advantage of public transportation. I opted to go public, concluding that I would rather take my chances with smelly train bums than waste my adrenaline reserves contending with road-raging douchebags. With my transportation decision locked in, I chowed down some pasta and turned in early. Here is how it all shook out on race morning:

4:01 a.m. – I briefly consider the possibility that I am merely having a dream in which my alarm is going off, because who in their right mind sets an alarm for 4 a.m. on a Saturday?

4:05 a.m. – Then again, what’s the value of restfulness? Can you really put a price on sleeping in on a Saturday?

4:10 a.m. – Still drunk with slumber, I clumsily jam a piece of bread into the toaster. I then take dedicate a few minutes to unnecessarily banging around the kitchen, slamming random drawers and cupboards in hopes that I will wake my upstairs neighbors—who apparently feel it is 100% acceptable to vacuum their floors at 11:00 p.m. Every. Single. Night.

4:15 a.m. – I stuff a piece of toast into my mouth. Chewing requires an exorbitant amount of effort.

4:45 a.m. – How dafuh does this disposable chip thingy work?

4:55 a.m. – I gather up my essentials (money, debit card, ID, sticky note with emergency contact numbers written on it) and tuck them all into the tiny zipper pocket on the waistband of my shorts. I make the difficult but necessary decision to leave my phone behind.

5:00 a.m. – Phone-less, I get into my vehicle and drive to the closest metro rail park-and-ride. I realize that, for the next several hours, no one will be able to contact me. I’m basically off the grid. It’s almost as if I do not exist. I am a rogue outlaw.

5:15 a.m. – I purchase a ticket for the metro. I am surrounded by other racers, many of whom are laughing and chatting as if hanging out in downtown Phoenix at five in the morning on a Saturday is a completely normal and in no way insane thing to do.

6:20 a.m. – I locate the start line. There is literally nowhere to warm up. Claustrophobia begins to set in.

6:22 a.m. – I realize that, as usual, I have picked the wrong line. I refuse to move because I am already too committed.

6:30 a.m. – As I emerge from the Porta-Potty, I notice that there is a track directly adjacent to the starting corrals. I look from the jam-packed staging area—with its dire lack of warm-up space—to the perfectly empty, perfectly good track. Butt-to-butt people. Deserted track. People. Track. People. Track. Oh no, I’ve gone cross-eyed.

6:50 a.m. – I begin to stress over whether I will make it to the starting line on time. This only intensifies the need to relieve myself.

6:55 a.m. – I briefly wonder if anyone would notice if I just popped a squat behind a bush.

6:58 a.m. – I make it to the front of the line. I then put the “pee” in “speed.” (That means I peed really, really fast, for those of you who aren’t hip to super-funny, super-clever bathroom puns.)

7:13 a.m. – I snag a cup of water at the first aid station and dump the entire thing over my head in a futile attempt to shock the lethargy out of my muscles.

7:21 a.m. – Confirmed: running this race was definitely a bad idea.

7:26 a.m. – I am being ushered out of the finish area. The next several minutes are a blur, but I somehow manage to navigate my way through the post-race expo, avoid all of the giant complimentary iced coffees being shoved into my face by a disturbingly peppy group of Dunkin’ Donuts representatives, collect my warm-up top—which, by some act of God, is on the sidewalk exactly where I left it—and make my way back to the metro rail station.

8:52 a.m. – I am awoken from a daze-like state of dehydration and sleep-deprivation by the sound of a robotic voice announcing my stop over the loudspeaker. I attempt to exit on the wrong side of the train. A kind elderly gentlemen politely stops me and points me in the right direction. I try to thank him, but all that comes out is a pathetic grunt. 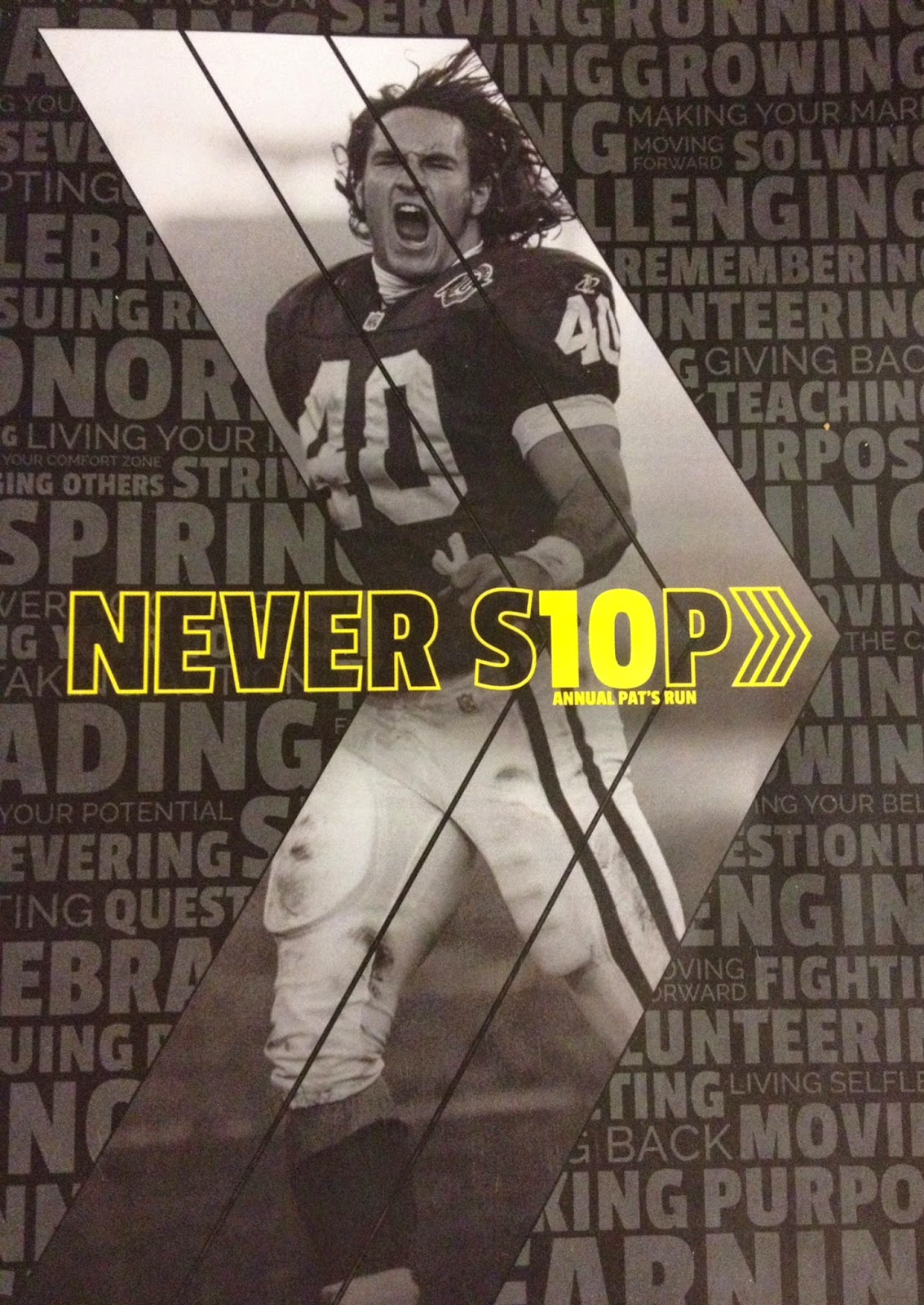 Alright, well, maybe next year.
Posted by Brooke Andrus at 7:13 AM